Leaks in a Bathroom 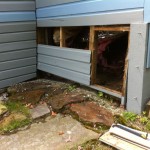 A wall on this camp was never or was no longer attached to the building so would swing in the breeze. The framing was only attached on one side and hung by a few nails from a siding board above it. It was quite an eye sore and the owner wanted it replaced with access doors to the crawl space.

A ripple in the siding was an indication of what was beneath. Once torn off it was apparent that the entire wall was supposed by one 2×6 joist which had rotted away years ago due to a plumbing leak under the sink. First I made a double 2×8 beam and secured it where the 2×6 had been and then went about the job of building framing for the doors. It came out looking great and got painted because the painter was on site at the time. 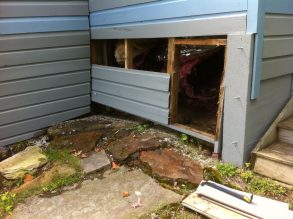 The angled wall under the porch may get fixed anther time. 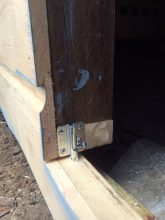 The owner would not approve a plastic outdoor fixture. 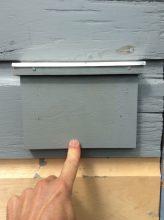 Held on with 2 screws. Mostly for construction projects so extortion cord won’t have to run through kitchen. 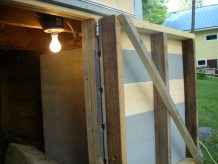 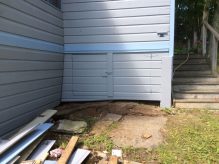