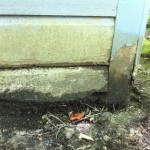 What started as just replacing a few rotted siding boards, turned into a fairly major structural repair. Under the rotted siding was a rotted pair of rim joists acting as a sill. Not the beam found in really old houses nor sill plate with rim joist supporting a subfloor as in modern homes, but in this case, built in the era between, a double rim joist resting directly on the foundation wall, was used to support the wall. The real source of the problem was a build up of leaves and soil that brought ground level even or higher than the top of the foundation and against the wood.

My solution was to remove the rotted portion of the rim joist (this included the entire outer joist), jack up the building and drive in a new pressure treated (P.T.) rim joist. For ease of assembly, I drove in various length sections of rim from 2 to 8 feet and nailed them to the remaining inner member of the pair of original rim boards. With no sill plate there could be no anchor bolts. The original re-bar pins had to be cut off. I hammer drilled at an angle through the bottom of the new joist into the foundation wall and screwed in 4″ masonry screws for anchors. Since the new joist was 1 1/2 inches thick, replacing the original 2 inch joist, I added a layer of 1/2 inch P. T. plywood to make up the difference. Then I replaced the rotted sheathing boards, lapped a strip of house wrap under the existing felt paper and added a 1 1/2″ drip cap at the foundation to keep water from reaching the top of the foundation wall. New siding and corner boards finished the job so the painter can make it look like new.

My suggestion to the owner was to dig down the walkway enough so a curtain drain can be installed and the finish grade comes out greater than 6″ below the wood. A gutter on the roof would be a good idea as well. And finally, in this wooded site, the leaves must not be allowed to accumulate on the walkway or the soil building will continue back up to the top of the foundation wall. 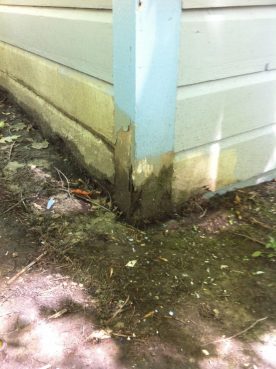 The process seems to have been done before. Corner boards spliced about 4’. 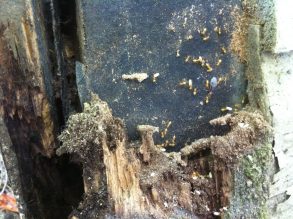 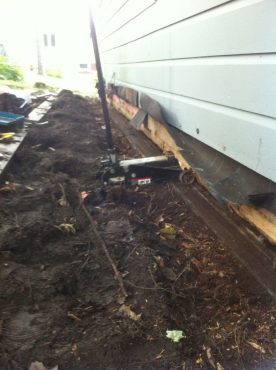 I used a floor jack because other jacks were too tall. 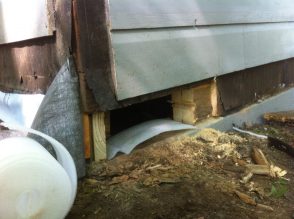 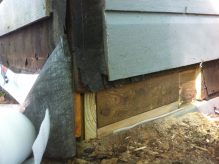 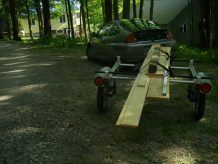 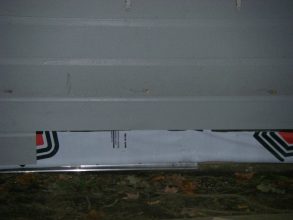 A rain makes the rule of 6″ between wood and the ground understandable.

This trim board will be painted blue. It was necessary when the addition was built.