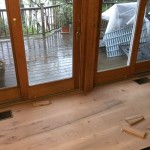 This job has been a long time coming. Years ago when I was first introduced to the home owner, she told me she had been living on the plywood subfloor for years and had plans for either a wide pine or wide hardwood floor. This past winter I came upon some low-cost wide pine lumber and with great hopes of saving her money, I hauled enough to her home and stickered it in her house to dry. Once dry, a few boards were planed as a test for appearance and quality and the result did not meet her approval. Too much gray weathering stain, spots of rot and severe cupping yielded a lower quality product.

After extensive hunting and researching by the home owner, she found some reasonably priced wide oak boards in widths 7, 9 and 11 inches at a local planing mill. She had them delivered and they acclimated for two weeks before I arrived to install the floor. For me, it meant returning to the site of one of my first jobs since I became self-employed in 2009. That early job was a wood shed. Anyway, the knotty oak boards were tongue and groove and first-rate quality. There were some knot holes that needed to be cut out but the knots made some really beautiful grain and variety in the wood. It was destined to be a beautiful floor! Here are some shots of the project. More photos after the knots are filled with epoxy and the floor sander/finisher has done some beautifying. 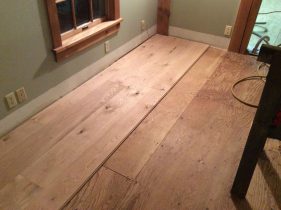 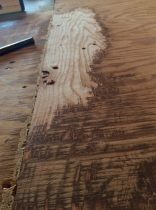 This area was high so used belt sander to make it more level. 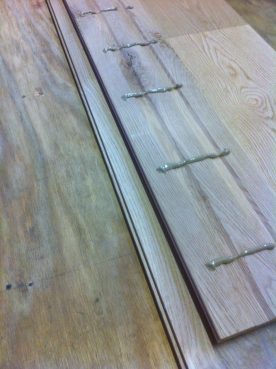 Glue on the bottom of a board.

Meeting up on both sides of this wall.

Using the pull saw to cut the slot. 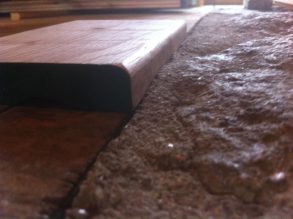 Checking the look of a rounder corner. 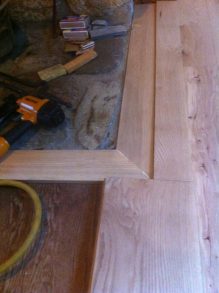 A corner of the frame around the hearth. Rounded corner on inside. 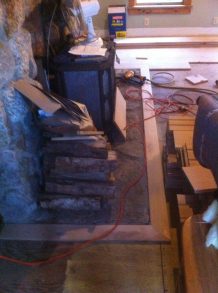 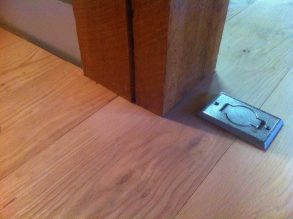 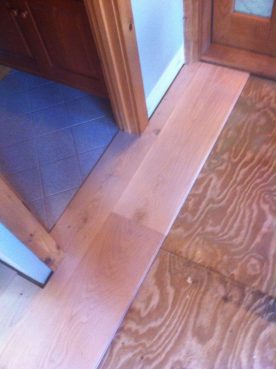 Blending in with the bathroom tile. 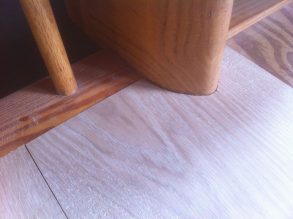 This was the second to last piece.

Short scraps used to fill in under the kitchen cabinets.

The final piece was at the top of the stairs. 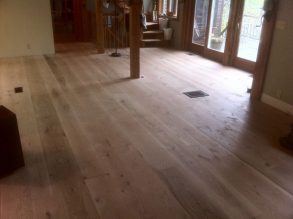 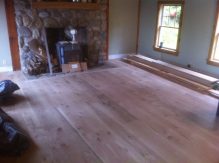 A few oak boards left over and the salvaged baseboard. 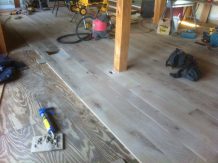 The glue tubes had a way of continuing to squeeze out glue.