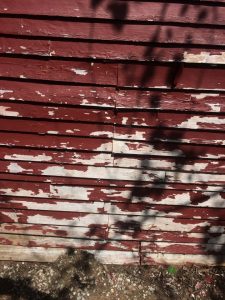 Not a whole house project but rather a partial re-siding where the snow and splash from the drip edge had rotted the siding. With no mopboard to designate a definite bottom of the wall and even a lack if framing at the bottom of the walls I elected to add some stout mopboards to make a distinct end of the siding boards. The whole object of this job was to improve the appearance of the siding. You’ll see by the photos there were many reasons to be dissatisfied with the existing siding. There was a lack of consistent reveal with variations from 3 to 4″, joints were allowed to line up vertically, 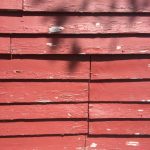 some clapboards were popping off and there was a serious lack of level or even flatness to the wall. In fact the barn had no foundation so was destined to be torn down in the not so distant future. None the less, the objective was to improve the aesthetics of the house and barn regardless of future plans. 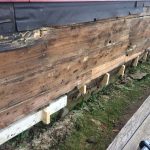 I started on the house and decided to make a vertical trim board under a window just to make a stopping place so as not to tear off some solid siding that looked fairly decent. 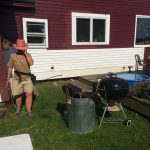 With the old siding torn off to about 4’ high, I had to add blocks at the bottom of the wall to hold the new mopboard. This I added, not level but parallel to the last remaining siding boards so my new siding would come out right.

The barn was a bit more challenging though the old clapboards came off with ease. I added a mopboard parallel to the siding in the first section 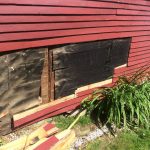 but where the wall started angling with the slope of the ground I switched to angling my mopboard to match the slope. Before attaching the mopboard, I cut 4’ long shims and nailed them vertically as an attempt to take out some of the worst of the bow in the wall. This didn’t make it flat but made it more reasonable for the new wood to bend over it and made the bow less obvious. I added the new mopboard at the bottom of the shims. The angled mopboard required long angled 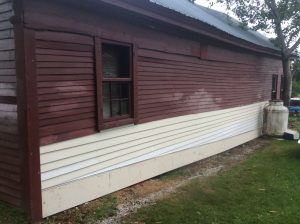 cuts on the clapboards but this was a much neater look than the old clapboards that changed reveal and just dropped out courses to adjust for the slope. Where old met new was a rather wide reveal in the middle but it didn’t make sense to match such wildly bent clapboards. I came back to look at it when it was painted and this was less noticeable. 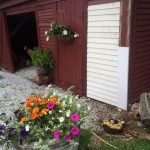 damaged by a vehicle. To fix this I made a new trim board, removed some sheathing boards and to be efficient I added shims thick enough to avoid replacing the sheathing and just attached the new siding directly to the shims. 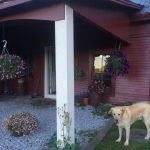 A final upgrade to the front porch was to wrap the pressure treated posts with pine. All the new wood I put on was pre-primed on all sides and cut ends were painted in an attempt to make the paint last longer and not peal the way it had before. 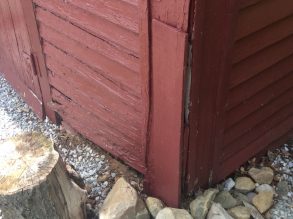 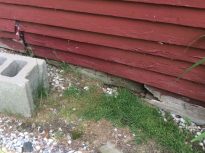 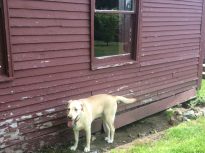 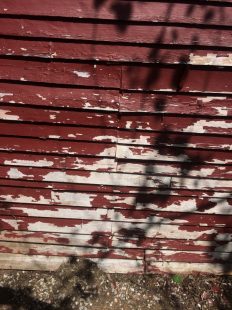 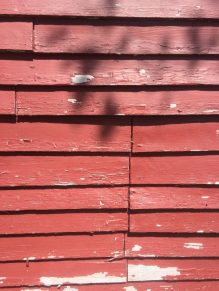 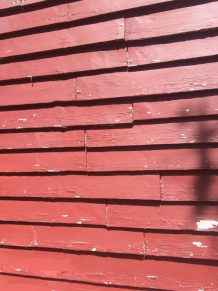 Joints all in the same vicinity.

Blocks were needed to fill out the bottom of the wall.

Tar paper for housewrap to keep out the drafts. 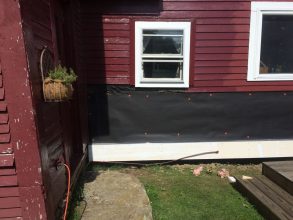 Joint at the gas line to avoid a visible notch. 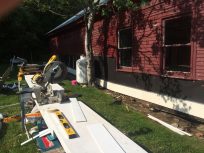 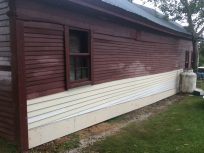 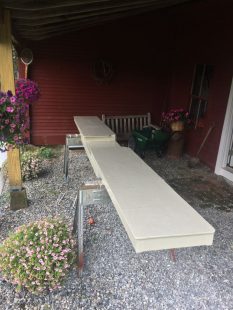 Rain started one day so I painted my chop saw station. 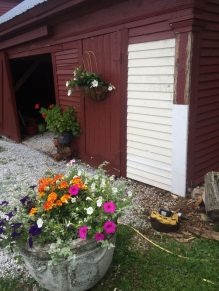 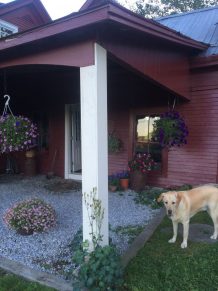 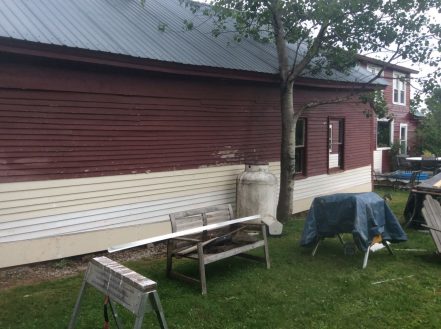