As promised, a little about the first screen porch. The existing screen was fiberglass and had been blown out by wind. The owner wanted to move the screen from the inside of the posts to the outside and use aluminum screen, both to make the screen more durable. 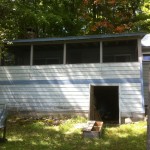 Aluminum screen attached to the outside of posts.

First some alignment issues were dealt with by adding some shims so the screen would land correctly. Also, though it turned out not to involve anchoring the screen as was originally planned, the siding on the end of the porch was a sort of hodgepodge consisting of many small pieces poorly aligned and even some mismatching pieces so I replaced it with some saved siding that had been in storage. Sorry I didn’t take a before photo but there is an after.

A staple air gun proved to be just the tool to anchor the screen. To hide the staples, I applied some pine trim to the exterior of the posts over the new screening. The owner kept ahead of me priming the trim and siding boards. 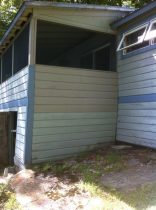 A stair was removed years ago leaving a patch work of siding that I replaced (gray primer). 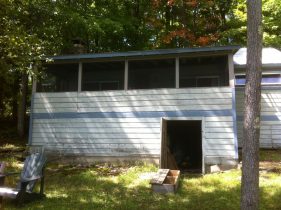 Aluminum screen attached to the outside of posts.