The space under a porch is often used for storage. This customer’s porch was built over a slope which presented an extra challenge to cover the space with sliding doors so stored items would be hidden. She also wanted to use the same sliding doors as privacy screen over an outdoor shower.

I built sliding barn doors with the bottom edges cut to match the slope of the hill. My customer chose a 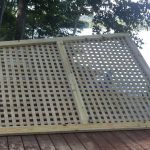 horizontal and vertical oriented lattice to fill in the 2X4 frames that made up the doors. This offered a very clean look.

A Collaboration on Design.

My first recommendation was to use a double rail system so the sliding doors could be used independently of each other with adjacent doors on different tracks but my customer wanted to know if one track could be used instead of two. I realized that it could but would require moving multiple doors to access some of the storage space. My customer assured me she wouldn’t need to access more than one space at a time and neither would she need the convenience provided by two tracks. As it turned out the doors rolled so easily on the track that even moving all three of them at once took little effort.

My drawing of the project helped me calculate the exact lengths of the door frame pieces which turned out being more complicated than I first thought because the spaces between posts varied. The drawing shows the three sections on the right were to be covered by the sliding doors while the fourth section (left) was open and allowed the doors to slide to the left. This fourth section was also where the outdoor shower utilized the left most slider as a screen. It was an efficient plan and it worked well. My customer was happy I could use her single track idea which saved considerable money in hardware and labor. 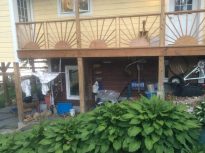 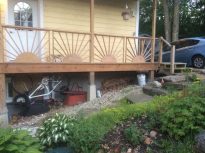 Right section almost tapers to a point. Stored items to be hidden. 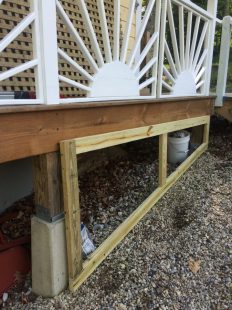 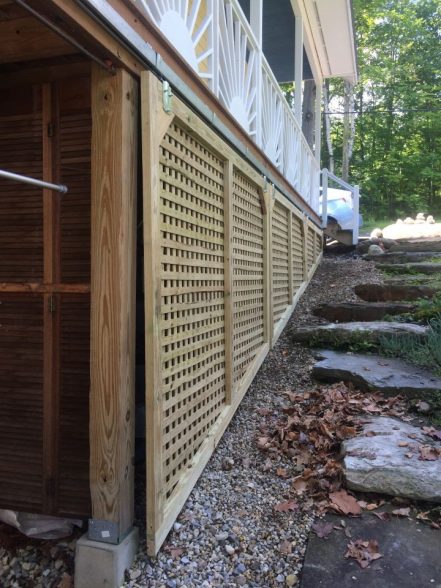