Filling in the Second Line of Sheep Fence 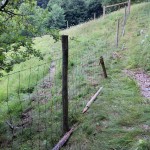 This second stretch of sheep fence was more challenging than the first because of sharp changes in grade and how frequent they were in a short distance.

An earlier post described the installation of posts and the top strand of barbed wire. It turned out  that lifting up or pulling down the 10 strands that make up the woven wire was even more of a challenge. I had to loosen the connection at the brace post several times to allow enough slack to reach over the humps and into the dips. It came out straight and tight and we, (Marilyn of Mount Nickwackett Sheep Farm lent a hand,) threw the old posts on the high side of the fence to plug the gaps under the bottom wire. These will catch soil and be more difficult for coyotes to dig under in the future. 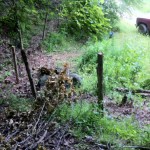 A new life for old fence that skirts the well head.

New posts and re-stretching the wire that connected the new fence with the gate on the road was necessary since the old one was nearly flat. To top off the job, the fence around the well head had been buried in silt as well as pushed over so we pried the wire out of the dirt and set new posts so it won’t be so easy to step over the fence there anymore. 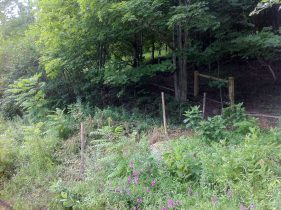 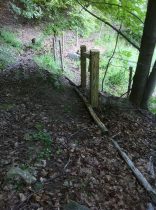 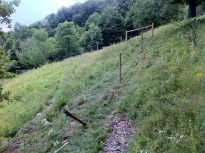 Tight enough to cut into the ground. 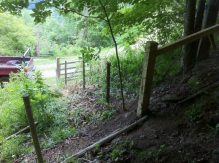 Connector fence to the road gate. 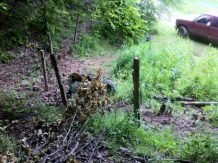 A new life for old fence that skirts the well head.