Trying Out the Kreg Jig 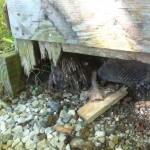 The next phase for Screen Porch #2 was addressing the rotted posts. Unfortunately they were built from non pressure treated 2×6’s and since they only rested on pressure treated blocks of wood, moisture freely passed from the blocks to the unprotected spruce posts. To add to injury, a change in the road above the camp increased the runoff under the camp so a silt accumulation also increased the moisture the posts were exposed to. As the photos show, it is a good thing they are being replaced now as their ability to support the porch has been severely compromised.

I started by removing the plywood which revealed a fiberglass insulated 2×6 wall with the paper on the outside. It may have been convenient to install the insulation from the outside but the moisture barrier paper kept the dampness from the interior in the insulation rather than letting is escape. Had it been on the inside it may have prevented some moisture from accumulating in the insulation. I pulled the paper off and in some instances the insulation might as well be removed because there is no sense in insulating under the porch as it is an unheated space. Instead I’ll build walls to enclose the pump and let the rest of the basement be cold. The floor itself is already insulated.

I cut new posts from 4×6 pressure treated lumber which matched up with the 2×6 wall and offered plenty of support. I used my laser level to determine the correct height for the porch at each post location. The two center posts need to be raised slightly which I accomplished with a jack and an extra post. The right corner post needed to come down 3/4″ and even with the rotted post removed the porch just hung there and wouldn’t come down and rest on my temporary support post. I could only guess that the plywood on the end wall was holding the weight so proceeded to pull most of the nails holding it. Even then my temporary post was loose. I cut the new post to the correct length so the 3/4″ gap still needed to be closed. A friend happened by walking his dog and he, the dog and myself all stood in the corner of the porch and it finally went down and closed the 3/4″ gap. I went back outside to screw it in place and it had gone up again. My friend jumped a bit and it came down so I screwed the post to the porch. You guessed it. The whole post lifted up with the porch when he left so now it is waiting for a big snow load on the roof to make the porch settle to where it belongs. Funny how buildings get used to staying in their location even when not supported! I’ll have to attach the plywood only at the top so the porch can go down. I’ll add the rest of the screws after it does next spring. Crazy!

Finished shots of this phase will come in a succeeding post as well and a spring follow up about if the porch corner comes down. 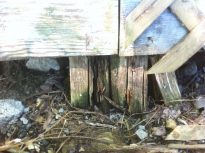 Spruce just doesn’t stand up to this treatment. 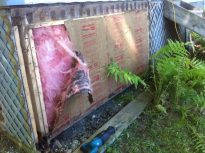 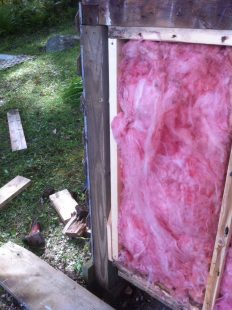 Eying down the wall. 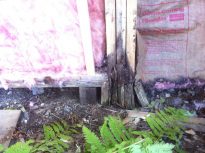 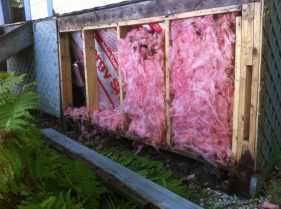 Some was so wet it was in a pile at bottom of wall. 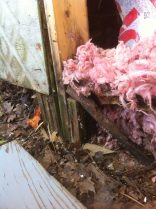 A ball of wet insulation and a rotted bottom plate.

Another fail of the hammer claw test. 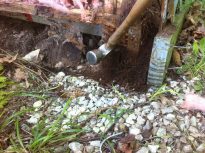 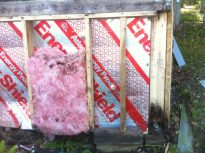 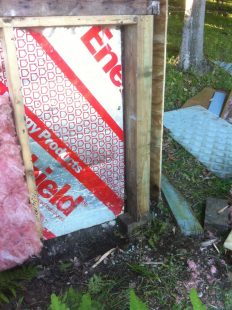