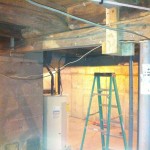 More than a dozen lally columns were added.

An old farmhouse badly in need of repair. First the support structure needed attention. Though some of the foundation was new, many support posts had been added before the floor was poured so not only were they cemented in but were undersized and only intended for temporary jacking. These I cut off and replaced with much heavier duty lally columns and added more where the hand hewn beams were sagging or had tremendous spans. In one case three posts together were used to support and elevate floor and walls of both levels above because a support beam had broken and allowed settling of several inches.

Splash from the roof had been soaking the front entrance which included an exterior step that was part of the interior floor system. The resulting rot was removed and replaced with modern lumber, blocking, ice and water shield, trim, and a landing that utilized a drip grate to reduce splash.