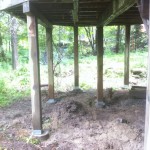 Not much to show for the work as it is mostly buried, but the deck ended up level.

This deck suffered from inadequate support. Sturdy 6x6s rested on decaying concrete piers that also seemed too shallow because the deck had heaved up to 3 inches in some places. I used temporary supports to hold up the deck while I poured new piers. Once hardened, I lowered the deck onto the new supports. This was a very labor intensive project as the soft wet ground did not allow any heavy equipment to dig the holes. A posthole digger, wheelbarrow and hoe were my tools.

Frost had heaved this short pier.

I used all but two bags of this for the project. 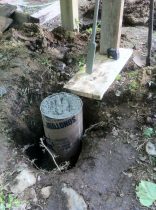 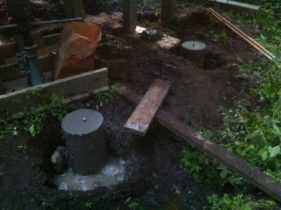 Freshly poured. Note the excess water the cement had displaced from the tube. The bottom 2 feet of the holes were filled with water. 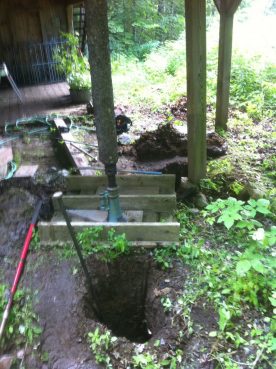 All 5 posts were needed to hold up one end of the deck so the area became a maze of posts and holes.

These post bases had some great design features for strength.

The laser represents the edge of the post and helps align the anchor bolt. 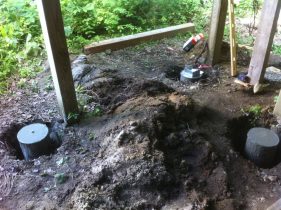 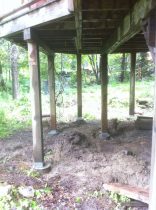 Not much to show for the work as it is mostly buried, but the deck ended up level.