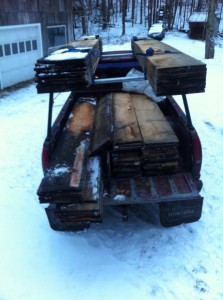 This lumber has been stickered outside for at least 5 years. It was a salvage of trees cut when a new power line was put in. According to the owner, the logs were left piled out of the way of the power line construction for a period before he could get to them and have them cut into boards with a portable bandsaw mill.

By the time I bought the lumber, the tarps covering the piles had deteriorated to the point they were holding in more moisture than they were keeping out. Thanks to the careful stacking job with stickers between every layer, air was allowed into the piles and prevented rot. Even so, because the logs were left piled so long before they were cut, worms had gotten into them and made holes and the wood was probably weathered enough at that time to create some gray staining. Certainly more surface staining occurred over the five years of being stickered in the owner’s yard.

Once I plane them, I expect various defects from worm holes to gray stains but to the right person these defects may be  assets to add interest with a more rustic look to their floor. I will write follow up posts describing the outcome of planing, preparing and installing the pine floor.

Another positive feature of these boards is their width. The majority are 15″ though 11 of them are almost 18″ wide. There are also some 12″ wide I’ll use to make a random width arrangement.